A sixth week of football is in the books.

Week 6 was full of strong quarterback performances with 11 quarterbacks scored over 20 points. The top scorer, who was the only one to crack the 30-point mark, was Drew Brees with 32 standard league points. Brees has been really good all year, and now entering week 7 as fantasy’s fifth top scoring quarterback. 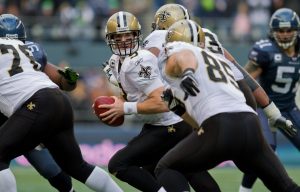 Following Brees was a surprising big time performance from Case Keenum, scoring 28 points. Detroit seems to be everyone’s favorite matchup this year, standing dead last in points allowed to opposing quarterbacks. Keenum had not hit 18 points prior to this week. The next three best guys were Tom Brady, Matthew Stafford, and Marcus Mariota all with 27 points. Two really good weeks in a row for Mariota and Brady. Cam Newton also retuned to put up 26 points, just trailing the leaders.

Jeer/Bust of the week: Alex Smith and Aaron Rodgers

I am altering the name of this award a little bit because I have to own up to some of my rare, bad predictions. I said last week I thought Alex Smith would have a good week with 20+, but he ended up doing poorly with just 8 points. Despite his Chiefs scoring 26 points, Smith went for just 224 yards and no scores.

As for Rodgers, I said he would be the weeks best QB, but he only managed 11 points. I am beginning to question the great one.

Mr. 17. For the third straight week, and fourth overall, Dak put up 17 points even with a fumble and his first interception. He continues to play really well and his Cowboys are certainty reeping the benefit. 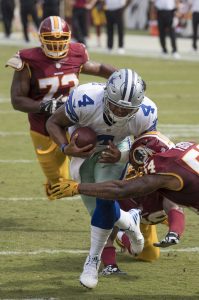 Stud of the week: Drew Brees

465 yards and 4 scores on the rival Panthers, and a win. You get what you pay for, right?